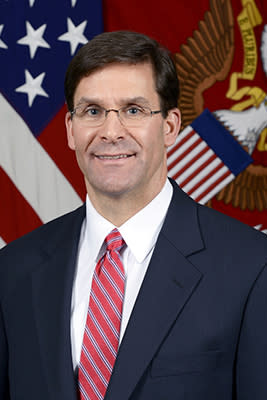 The Forum Club of the Palm Beaches will kick off its 2022-2023 Season with an event featuring Dr. Mark T. Esper, the 27th U.S. Secretary of Defense on Wednesday, August 31st, at Noon at the Kravis Center for the Performing Arts -- Cohen Pavilion.

Dr. Esper led the U.S. Department of Defense through an unprecedented time in our nation's history: from conflict with Iran, an ongoing military campaign in Afghanistan, and counter-terrorist operations in the Middle East; to open competition with China and Russia amidst a fundamental shift in the geo-strategic environment - all while navigating the greatest civil unrest and political turmoil America has seen in decades, a major recession and the spread of a global pandemic the world had not experienced in over one hundred years.

As Secretary of Defense, Dr. Esper was responsible for ensuring the United States' national security, protecting the American people at home and abroad, and advancing the country's interests globally. Esper made major strides in implementing the National Defense Strategy, which called for a return to preparing for a high intensity conflict in a new era of great power competition with China and Russia. He also established the Space Force and Space Command, proposed a dramatic change in the size and composition of the U.S. Navy, enhanced the resourcing and operations of Cyber Command, and led a major reform effort that reorganized the Department and freed up billions of dollars for higher priorities. Esper worked hard to strengthen alliances and grow new partners, especially in the Indo-Pacific, and helped drive a major increase in the readiness and capability of NATO members while proposing to reposition U.S. forces farther East in Europe to deter Russia.

Prior to becoming Secretary of Defense, Dr. Esper served as the 23rd Secretary of the U.S. Army from November 2017 until June 2019. Esper graduated from West Point with distinction in 1986 and received his commission in the Infantry. During 10 years on active duty, he served in the 101st Airborne Division and participated in the Gulf War with the 'Screaming Eagles', and later commanded an airborne rifle company in Europe in what is now the 173rd Airborne Brigade. He then served another 11 years in the National Guard and the Army Reserve.

During his 21-year military career, Dr. Esper earned numerous awards and honors, including the Bronze Star, Legion of Merit, and Combat Infantryman's Badge. He is a two-time recipient of the Department of Defense Medal for Distinguished Public Service and received the Minutemen Award for outstanding service from the National Guard Bureau in April 2021, and the General Andrew J. Goodpaster Award for outstanding leadership and selfless service from the George C. Marshall Foundation in July 2021.

Dr. Esper is a member of the Council on Foreign Relations, the Veterans of Foreign Wars, and the American Legion. He is also the first John S. McCain Distinguished Fellow at the McCain Institute in Washington D.C., the Distinguished Chair of the Modern War Institute at West Point, and a Board Member of the Atlantic Council. Dr. Esper also serves on several private equity and venture capital portfolio company boards. He is a partner at venture capital firm Red Cell Partners, where he is Chairman of the national security practice.

Dr. Esper's memoir, A Sacred Oath, chronicles his service as U.S. Defense Secretary - a turbulent and critical period of modern American history. Copies of the book are available for purchase on the Forum Club's website or at the event thanks to a partnership with the Palm Beach Bookstore.